Blue Corn by the Bushel

Food fads come and food fads go but one that has been around for thousands of years is Blue Corn, a variety of Zea maize. Sacred to the Hopi and consumed for over a thousand years, blue corn is another superstar food. Different corn types come in many colors and the most important in the Hopi world in sacred ceremony is blue corn. Blue corn was the keystone crop with squash and beans that sustained the Hopi and many other indigenous groups. The Hopi in particular developed these crops to be drought tolerant and productive in spite of harsh desert conditions.

While white corn is not considered as being great for diets because of its high starch load, blue corn is entirely different. Blue corn contains 20% more protein and a lower glycemic index than other types of corn and has those all-important anthocyanins. Anthocyanins are the blue and purple pigments in grapes and blueberries.

This pigment can occur in corn, rice, cabbages and other plants and has some unique properties. They help cells by helping prevent our bodies from “rusting”. In a study published in Science Daily anthocyanins found in blue and purple corn are anti-inflammatory. The blue corn is a flint type of corn and has been used to make tortillas and flat breads by native Central and South Americans for centuries.

The blue corn gene is dominant so it tends to drift and “contaminate” other types of corn. There has been exponential growth in the market for organic blue corn for chips and tortillas. They are a food and not a genetically modified fuel source. Speaking of corn chips, they are healthy but they are not low calorie. Bags of blue corn chips taste a lot better and can be just as addictive as potato chips. 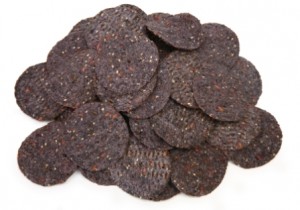 dough. Let stand for 20 minutes. Hand roll golf ball sized pieces of dough, then pat the dough (or use a tortilla press) into your palms, brown it on both sides on a hot griddle and lightly oil.

Blue corn and blue corn flour masa can be found in health food stores, Mexican grocery stores and on line. It is also known a masa Azul. Blue corn can also be used any way regular corn meal can be used such as polenta, corn bread, hot cereal and pancakes.

A Nod to Nodding Onion

A Tale of Tomatoes

Maple Trees for All Seasons