In the warming weather after a long winter, it’s only natural that the thoughts of gardener and cook alike turn to tender and flavorful spring herbs. If spring hasn’t quite sprung in your neck of the woods, greenhouses, cold frames and indoor containers can all help you get cooking with herbs sooner.

These herbs can grow well in containers, even indoors, in moist, fertile soil that drains well, though they’re fairly tolerant of imperfect soil conditions. Additionally, these three herbs all feature edible blooms, giving the creative cook even more ways to bring spring to the plate. Staggered plantings will extend the herb harvest, allowing one to extend the season or to put up some herbs for later use. To clean herbs after harvest, rinse herbs with leaves on stems in cold water and drain. Dry on towels or paper towels in a single layer, treating them gently the whole time. 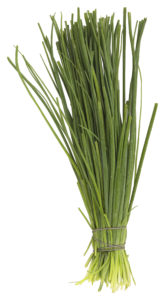 In the gardeners’ year, many use chives as a guide; if the chives have sprouted, it’s spring. Considered a must-have herb by many kitchen gardeners, it conveniently grows well in the kitchen. Chives can be snipped back and used as needed, and will replenish their foliage. Their flowers can be used whole as garnishes or in salads and the chopped flowers can be used in dishes where a heady chive flavor is desired. Chives can be chopped, placed in ice cube trays, covered with water and frozen for later use. The herb ice cubes can be tossed into soup straight from the freezer. If using in sauces or other dishes in which added water is unacceptable, place a small screen over a bowl and let the ice cubes melt; the herbs should remain on the screen. Chives can also be dried and stored out of light for later use. 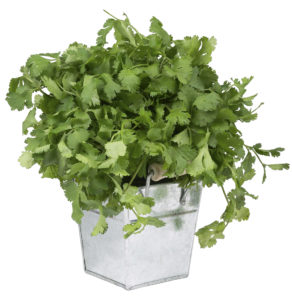 Coriander, also known as cilantro, is one plant used in many different ways. The various parts of this plant lend their flavors to world cooking, from Central Asian to South American cuisine. The leaf is called cilantro, coriander leaf, as well as Chinese parsley- these are best used fresh, and are sensitive to heat; therefore if adding to a heated dish, it’s best to chop the leaves and use them as a garnish after cooking. Cilantro flowers can be used like the leaves, chopped as a flavorful garnish. The dried fruits and seeds are known as coriander, either whole or ground. Maximize coriander’s flavor by toasting the whole seeds or the powder in a dry pan over low to medium heat. Powdered coriander lends its flavor to garam masala and Indian curries, as well as African and Jamaican dishes. The roots of the plant have a deeper, more intense flavor than the leaves and are often found used with garlic in Thai soups. Growing cilantro in cooler weather reduces its tendency to go to seed, so if you will be collecting them for coriander, have patience. Cilantro is difficult to store, as the flavor and texture degrade in the freezer and dried cilantro loses its flavor as it dehydrates. Coriander, on the other hand, can be stored with the fruits whole and only ground as needed.

Dill is one of humanity’s most time-tested herbs, perhaps due to its versatility. Dill leaves can be dried for later 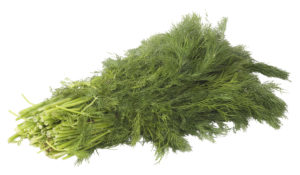 use, at which point it’s called dill weed. Used fresh, the leaves taste the best if they’re harvested before flowering. Use the yellow flowers just like the leaves, only in smaller quantities, as their flavor is more intense. Dill seeds are also used in pickling as well as baking. Dill can grow to a large size, but dwarf dill also known as Fernleaf usually grows to only about 18 inches in height, and was bred to reduce bolting.  If growing dill specifically for dill seed, try a variety called Bouquet. Harvest dill carefully, using small scissors to snip the desired amount of leaves from the stem. Dill can be dried, or frozen in either the ice cube method or as whole sprigs.  If frozen whole, place the sprigs on a lined baking sheet in the freezer. Once they’ve frozen, place in a freezer bag and label them.

These herbs all have their uses in specific types of cuisine. However, there are a few preparation methods that are common to them all. Chop any of these herbs fine and roll a log of cream cheese in them. Try to serve with crackers or bread that compliment the flavor of the herb, for example, cornbread or corn crackers with the cilantro, and rye with the dill. This makes a lovely hors d’oeuvre and is quick enough to put together for unexpected company. Herb butters can also elevate a simple dish. Soften your choice of salted or butter in a bowl, and mix in chopped herbs, an amount to suit your tastes. Place the butter on a sheet of waxed paper or plastic wrap and roll into a log. The log of herb butter can be stored in the refrigerator for short term use, or in a  labeled bag in the freezer. The uses of a fresh herb butter are almost endless. Try cilantro butter on an ear of corn, or a dill and chive butter stirred into potatoes. Many grilled meats also benefit from a thin disk of herb butter served on top.