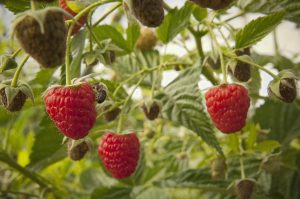 One cup of raspberries per day will provide 88% of your daily requirement for vitamin C. Vitamin C assists in the prevention of eye diseases including cataracts and glaucoma. Vitamin C improves circulation by strengthening capillaries and making them more elastic. This ability helps prevent nosebleeds and might even help prevent strokes.

Eating raspberries aids the body in detoxification and helps prevent degenerative diseases. A cup of

raspberries every day will help individuals lose weight, reduce blood pressure, provide capillary resistance in developing cardiovascular disease, prevent allergies, prevent infections and can also improve iron absorption. Anthocyanins which give the raspberries their red or purple color protect eye capillaries and maintain heart health. Eating a cup of raspberries every day is also beneficial for anyone under stress. It reduces the inflammation of chronic diseases such as arthritis and can even reportedly help prevent some damage caused from heavy smoking.

Raspberry contains sufficient amounts of potassium, calcium and magnesium. It is also rich in the trace minerals manganese, zinc, iron and chromium as well as vitamins B and C. This helps prevent leg cramps and prevents insomnia during pregnancy. Red raspberry fruit is eaten, processed into jams and dried into fruit leathers. 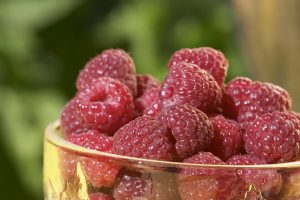 A compound that occurs naturally in raspberries, raspberry ketone is not exclusive to the raspberry. It also can be found in a wide variety of other plants such as Turkish rhubarb. It can also be found in the leaves of maple, larch, yew, maple and some pine trees.

Raspberry ketones found in raspberries increase metabolism in our fat cells by increasing enzyme activity, oxygen consumption and heat production. This boosts fat metabolism making it less likely for us to deposit fat into our cells. It also provides access to the fat that we have already stored. This process makes it less likely to have the inflammation that accompanies obesity. The ketones also decrease the fat-digesting enzyme–pancreatic lipase produced in our pancreas causing us to absorb less fat.

Tilirosside is a flavonoid that is found in many of the rose family plants. These plants include rose hips, strawberries and raspberries. This compound activates the hormone adiponectin which is produced in our fat cells. Type 2 diabetics do not produce enough adiponectin and their bodies are unable to regulate blood sugar and blood fat. Triliroside activates the adiponectin and thereby improves insulin, blood sugar and blood fat balance.

Raspberry extracts also block the enzyme alpha-glucosidase, a starch digesting enzyme. When this enzyme is activated in the digestive tract, it speeds up the breakdown of starches into sugars. The extracts block the enzyme, making it easier for individuals to regulate their blood sugar. The glycemic index for raspberries is between 40-50 GI.

Red raspberry leaf can aid in diarrhea, influenza, heart problems, fever, diabetes and vitamin C deficiency. It can be used in promoting detoxification of the body by promoting urination, perspiration and bile production. Made into a tea, it can be used as a gargle for sore throat, or applied directly to skin rash to relieve itching.

Harvest wild or tame raspberry leaves in spring or mid-summer for maximum benefits. Use them freshly picked and dry them in a dark place. Spread in a single layer on a cotton sheet hung hammock fashion from the ceiling.

Raspberry leaves can also be dried in a food dehydrator. Raspberry fruit can be dried and added to tea mixtures for added nutritional value and raspberry flavor. Pour one cup boiling water over a teaspoon of dried leaves and let it steep at least 15 minutes. You can drink this tea either hot or cold. If you do not drink all that you steep immediately, store the tea in the refrigerator. Tea can also be made into ice cubes to add to other drinks. Simply pour cooled tea into an ice-cube tray and use as desired.

Red raspberry tea is a reliable remedy for diarrhea, thrush, sore throat, canker sores, dysentery, urinary complaint, cold and fever. It is good as both a hot or iced beverage and can be given to reproductive women, the elderly, teens, children, and anyone recovering from an illness. Strong raspberry leaf tea can be used externally. It can be applied to sooth sunburns, eczema and rashes. A tincture can be made as well and swished inside the mouth to alleviate gingivitis, canker sores, cold sores and gum disease.

Make a tincture by filling a quart jar with fresh or dried (fresh is better) raspberry fruit, root and leaves. Pour one cup of vodka over the raspberry and allow to steep for two weeks in a warm dark place. A cabinet that you frequent several times a day is a good location because you will need to shake the contents every time you see the jar. At the end of two weeks, strain the mixture through doubled piece of cheesecloth. Dark dropper bottles are the best storage containers for tinctures.

Donna Brown is the author of the gardening book Simply Vegetable Gardening which is available on her website: Cygnetbrow.com. She can be contacted at cygnetbrown@gmail.com.

A Fruit Synonymous with Cool

Strawberries are the Most Exciting Fruit of Summer