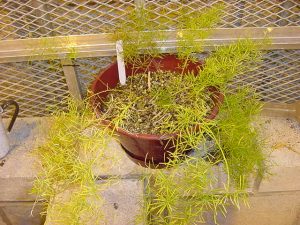 Best Temperature: Does best in average to cool condition but can survive a variety of temperatures from frost to full sun.

Water and Humidity Needs: Keep the soil lightly moist but this plant can tolerate drought for a while.

Common Problems: The appearance of yellow foliage means too much light or a lack of nitrogen. If the leaves become brittle or fall off easily, it is time to repot the plant into a bigger container.

Propagation: Divide large plants after cutting the stems down to the soil. It can also be grown from seed.

Asparagus fern, of which there are many kinds, is related to the vegetable young children fear at dinner time and their new shoots actually look like skinny asparagus spears. The most frequently used ornamental asparagus fern is called A. sprengeri.

Asparagus setaceus, commonly called asparagus fern, is not in fact a fern. It is a bushy, evergreen, twining vine with wiry, spiny, scrambling or climbing stems that typically grow to 10-20′ long. It features feathery, fern-like flattened sprays of bright green stems, small white summer flowers and deep purple berries. The true leaves of this plant are tiny dry scales. The structures which appear to be leaves are flattened shoots (modified stems) called cladodes or cladophylls on which the flowers and fruits are borne. Cladophylls rise from the axil between the stem and the scale-like leaf. Mature stems become woody over time and develop sharp spines. This vine is native to South Africa, but has been introduced in subtropical areas around the world. It has shown weedy tendencies in some locations.

New asparagus growth expands to form feathery, branched shoots 1 to 2 feet long. From a small plant in spring with 3 to 4 stems, at summer’s end up to 10 or more billowing stalks emerge from pots or containers.

Asparagus fern is primarily used as a filler plant in containers of mixed flowers growing during the summer. It works in wall boxes, hanging baskets, window boxes, and planters of all kinds. It is a vigorous plant so combine it with plants of some stature so they are not overpowered.

Several other asparagus relatives are also used as ornamentals. A. densiflorus Myers is a selection with stiff, upright growth like foxtails. A. asparagoides, the florist’s smilax, is sometimes planted in flowering containers. Leaves are coarser, and it is a definite trailer.

Brassaia actinophylla or Umbrella Tree is a Great Greenhouse Plant

Oxalis is a Great Greenhouse Plant