Evaporative and Passive Cooling in a Greenhouse 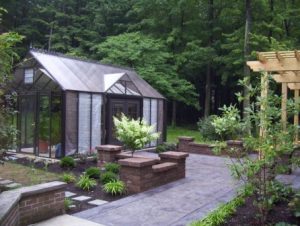 Keeping a greenhouse cool throughout the summer heat can be a difficult task. To keep the plants within a greenhouse happy and healthy, a horticulturist must maintain a temperature in his or her greenhouse that is suitable for plant growth. Extreme temperatures can cause myriad of problems for greenhouse hobbyists, including stunted growth, root pathogens, wilting and even death. 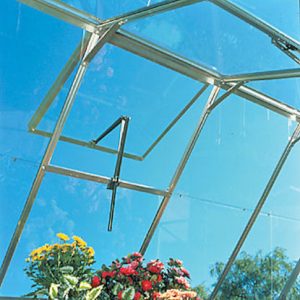 Convection is the physical movement of a warm gas or liquid to a colder location. Greenhouses will naturally trap heat so it is advantageous to the gardener to use convection as a way of dispersing that captured heat. Convection is commonly used in greenhouses in remote areas or in greenhouses that do not have access to electricity. To use convection most efficiently, a grower needs to place vents near the top of the greenhouse from which the hot air will escape. As the hot air escapes out of the top of the greenhouse, it is replaced with cool air that enters from the lower portion of the greenhouse. This natural exchange of hot air for cool air can significantly reduce the temperature within a greenhouse.

A shade cloth is a fabric-like material that is placed next to the walls and/or ceiling of a greenhouse to help block some of the sun’s radiant energy from entering the greenhouse. As its name suggests, a shade cloth’s

purpose is to create shade within a greenhouse. Many growers use shade cloth to protect sensitive plants from hot spots, but a shade cloth can also be used as an effective passive cooling device. Shade cloth can be made from a few different materials, such as aluminum alloys, polyester, or nylon.

Shade cloth is sold by the percentage of shading it provides. Higher or lower percentages are available, but the shade cloths mainly used by horticulturists will shade 50%, 60%, or 70% of the sunlight. The higher the percentage shaded, the more protection and the cooler the greenhouse will be. There are also white or reflective exterior shade cloths which are even more effective for cooling as they reflect a higher amount of the solar heat away from the greenhouse.

Physical Location of the Greenhouse 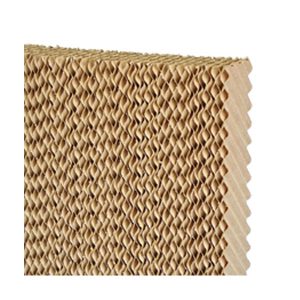 One of the most popular and efficient ways to cool large, commercial greenhouses is with a wet wall system. A wet wall system consists of cooling pads encased in large aluminum housing. The aluminum housing appears similar in appearance to a honey comb (frame with multiple holes). The honey comb design allows air to pass over the cooling pads which are kept drenched with water. As air is drawn into the greenhouse, it passes through the wet pad and is cooled. This system works in a way that resembles a radiator cooling the engine of a car. The powered fans, which are placed on the wall opposite the wet wall system, are the driving forces of the air movement. Motorized shutters are positioned over the wet wall system to allow air to enter the greenhouse. These shutters are usually controlled by a thermostatic controller. This means they will open and close depending on the temperature. Wet wall systems are fairly expensive and require more extensive plumbing which is why they are generally reserved for large, commercial greenhouse applications. 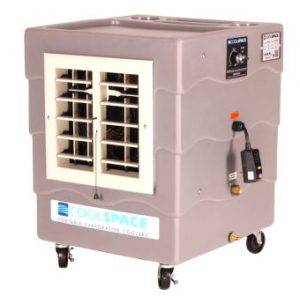 For some small greenhouses, a fogger or humidifier can serve as an evaporative cooling system. A fogger is a device that emits water in a fine fog. These devices can be placed directly behind a circulating fan so the water-cooled air is blown around the greenhouse. As the water evaporates, it also creates a cooling effect. A 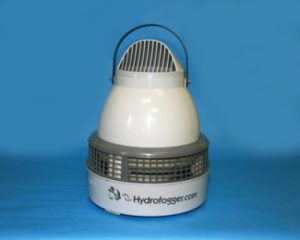 humidifier found at a big box store can be set up in a similar fashion. When placed behind a circulating fan, the cool, moist air will be blown across the greenhouse for an evaporative cooling effect. Both foggers and humidifiers emit water droplets so small that the plants within the greenhouse do not get wet. Instead, the water quickly evaporates and cools the greenhouse’s climate in the process. Foggers and humidifying systems should not be confused with mist systems. Misting systems emit larger sized water droplet that will settle on plant leaves and actually make the plant wet. This extra moisture, combined with warm temperatures, can cause a whole new series of problems, including pathogenic molds and fungi.

Eric Hopper resides in Michigan’s beautiful Upper Peninsula where he enjoys gardening and pursuing sustainability. He is a Garden & Greenhouse senior editor and can be contacted at Ehop@GardenAndGreenhouse.net.

Sizing Heating and Cooling Equipment for a Greenhouse