It’s Almost Spring and Your Roses are Waking Up

Spring is in the air, or if not yet, it soon will be. Roses, like other perennial plants, begin to wake up when the days lengthen and the soil begins to warm. That’s much earlier in than we suspect, since we’re still wearing our down jackets! Rose roots start growing long before the tops of the plants exhibit any signs of life, replacing the delicate feeder roots that were destroyed over the winter. 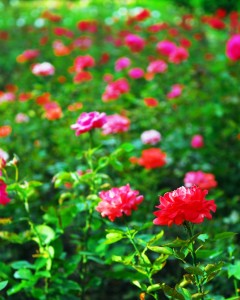 But the tops of the plants, among other spring signs, will tell the rosarian when it’s time to get out into the garden and lavish them with the attention they need to transition into the new growing season. The budeyes along the length of the canes begin to swell, followed shortly thereafter by tiny new leaves unfurling into the spring sunshine. This is always at the same time that the forsythia blooms, and even though there are big variations in spring weather, the roses begin to sprout and the forsythia blooms at pretty much the same time every year. Even when we say spring is “late” this year, the forsythia bloom never varies by much more than a week.

This is always in mid-April, in my New England garden. So I set my rose pruning date for around the 18th of April and stick to it every year. Here in Massachusetts, that’s Patriot’s Day, in remembrance of Paul Revere’s ride in 1775 that began the American Revolution and it’s always a Monday holiday, when the Boston Marathon is run, so it’s an ideal long weekend to do the rose chores.

Of course, warm-climate gardeners have already completed these chores and are awaiting their gardens’ first bloom, which will pop at just about the time northern rosarians are pruning. But roses are the same everywhere, it’s just the timing that’s different.

This forsythia-blooming time is the most important opportunity for rosarians to get their roses off to a great start in the new growing season. And the busiest, as this is the time to remove winter protection and prune the existing plants, to plant any new roses you just couldn’t resist buying, and to begin your fertilizing and spraying regimens that will continue throughout the season.

If you used soil or mulch as a winter protection material, you may want to leave it in the rosebed as a rich top dressing that adds good organic material to the soil. Gently remove the soil mounds from around the plants, even using a gentle stream of water from the hose to uncover the new sprouts, which break off easily if you happen to nudge them with your fingers. Then prune the plants to remove all of the black or brown winter-damaged parts of the canes, cutting back to nice green cane. You may have to prune way, way back, almost to the ground, but don’t worry! If there’s any green cane remaining, the plant will spring into life very quickly.

If there is no green on the plant at all, don’t be too hasty in pronouncing it dead. There may be brand new canes under the soil sprouting from the bud union. It’s possible to dig the soil away from the buried bud union to see if there are any basal canes sprouting, but they are so brittle you run a great risk of breaking them off.  It is better to wait a month to see if any new canes emerge from under the soil. If the plant was weak last fall, however, chances are that winter did it in and it should be replaced.

Some varieties of roses grow better in one climate than another, but with proper care, almost any rose will grow in any climate. To further confuse you, occasionally a rose plant just never “takes” in your garden. It’s difficult to determine exactly why, especially if your other roses are strong and healthy. Perhaps it was mishandled at some point and the roots were allowed to dry out, maybe even before you bought it. But sometimes you just get a plant that just malingers along, weak and scraggly, never reaching its potential. Winter is usually its portal to death.

It’s important to realize that this happens to the even the most experienced rosarians, that it probably wasn’t your fault, and that you shouldn’t be discouraged! Buy another plant of the same variety and it’s likely you’ll be delighted with the results!

Once the roses are pruned, they’ll start growing fast. Fertilize existing plants right after pruning, but withhold fertilizer for a month from newly planted roses.

It’s exciting to watch roses grow in the spring. They look entirely different every day. After a month or so, you’ll see the tiny new buds forming, and after another month, you’ll have the most amazing big healthy plants with lots of flowers!

Ann Hooper is a certified American Rose Society Consulting Rosarian, who grows nearly 400 rosebushes at her home near Boston.