Peppers are a Spicy Addition to any Kitchen Garden 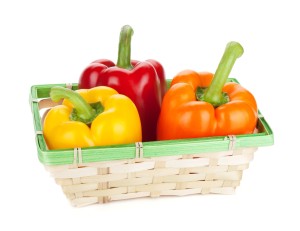 Valued for their hits of heat, notes of other flavors and their robust nutrient profiles, peppers are a spicy addition to any kitchen garden. The sheer number of varieties can be boggling, even for an ambitious gardener, so a little forethought will go a long way in determining which varieties to plant for one’s desired uses. Sweet varieties, such as bell peppers, are typically the most well-known and most-gardened of all the peppers. Their sweet flavor endears them to cooks for everything from salads to main dishes, with peppers stuffed to bursting with fillings including meats, cheeses or other vegetables. As these sweet peppers get most of the attention, some other pepper varieties deserve consideration as well.

Chili peppers vary in intensity, shape, color and size. One thing that most peppers have in common is a need for warmer temperatures and well-drained soil. Many pepper plants require more warmth than tomato plants, making them a good candidate for greenhouse growing in climates that stay cool into May. As pepper plants are also typically small and compact, they can grow quite happily in containers, and as the weather warms, a potted pepper plant can make an attractive and peppy addition to an ornamental garden.

Starting pepper plants from seed requires starting the seeds indoors a few weeks before the last frost of the season, whether the plants are destined to be grown in the greenhouse, in containers or in the garden. Some chili peppers require 20 days to germinate and sprout. When the seedlings have developed a couple of sets of leaves, it’s time to harden them off and acclimatize the little plants to the conditions in which they’ll be kept. If it’s warm enough, harden the plants off outside, if not, to the greenhouse they go. Pepper plants do require some water – the adage that the hotter and drier the weather, the hotter the pepper doesn’t apply if the plant has died of thirst. Water the plant for adequate moisture, and then let the soil dry out before re-watering. The final requirement for pepper growing is plenty of light. The more light these plants get, the better.

In order to plan which varieties to plant, consider the final culinary purpose of said plants. An assortment of seeds includes everything from piquant Mediterranean pepperoncini to brain-melting habaneros and Scotch bonnet peppers. Cayenne, Serrano and Aleppo peppers all pack a punch, but at a heat level quite a bit less than habaneros. Jalapenos, New Mexican peppers and Guajillo peppers again decrease in heat, although individual peppers can sneak in a surprise. Poblanos are a delicious pepper at the low end of the heat scale and are used as Chiles Rellenos, in Tex-Mex and Mexican cuisine. Pimentos de Padron are also typically classed with poblano peppers in terms of heat, but are a bit more of an adventure to eat. Served as tapas or appetizers at Spanish happy hour, Pimentos de Padron are sautéed in olive oil and sprinkled with sea salt. Nine times out of ten, the peppers are a tangy green flavor, but the other one pepper may make the snacker glad of a cold beverage nearby.

When harvesting , handling or preparing a large number of hotter peppers, it’s advisable to wear gloves. The chilis can cause chemical burns of the skin on the hands, an unfortunate discovery I made when preparing fresh jalapenos in a restaurant kitchen. Wearing gloves can also keep the hands from contaminating the eyes or other sensitive places with spice. Personal experience demonstrates that a washrag soaked in milk can help ease eye burning associated with careless handling of chilis.

Two basic methods of cooking chilis result in a variety of end uses. Rajas, strips of peppers, can be used for quesadillas, burritos, pizzas, burgers, sandwiches, pasta dishes, or eggs, while smoky, roasted peppers contribute their flavor to casseroles, soups, salsas and other dishes. Neither preparation is especially difficult.

For Rajas, chop an onion and peppers as desired. Heat a neutral oil, like canola, in a skillet over medium heat, then sautee onion and peppers until they reach optimum tenderness for their end use. There are many variations on this method of preparation that include broths, herbs, and seasonings, so experiment to find the best.

Roasting peppers fills the kitchen with a smoky, spicy smell. Some may be sensitive and experience burning eyes or noses, so be sure to ventilate well. Rinse chilis, and rub them lightly with a coat of oil. Arrange chilis on a broiler pan for either the oven or toaster oven. As the chilis broil, their skins will blister and bubble, blackening in places and the meat of the chili will become tender. Turn the chilis to ensure complete cooking. Over a live fire, substitute a durable skewer for the roasting pan. After the peppers are roasted, set them aside in a covered bowl or casserole container. The condensation will make the skins easier to peel. Peel peppers, leaving some spots of skin for flavor, and split them, removing the seeds and stem. The peppers are now ready to use in a multitude of recipes.