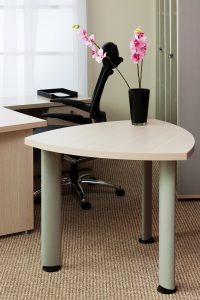 The efficacy of humidity trays and hand misting of in-home orchid collections has been debated for years. But there has not been a great deal of actual testing to confirm or debunk the theories. Let’s forget conjecture on misting and humidity trays, and think of it scientifically.

Let’s say we have a 10′ x 10′ x 10′ “room” (size selected for calculation purposes), at 74°F (also selected for math simplicity), that volume of air can hold one-half pound of water to give 50% relative humidity. One-half pound of water is about a cup in volume. If the room was totally sealed off, it would be easy to keep the humidity level high. Unfortunately, that room isn’t totally sealed from the environment. There are other rooms in houses, no house is perfectly sealed and walls do “breathe” by design. That more-or-less infinite air mass around us and the laws of nature try to spread that cup of water uniformly over the universe, so we need to replenish the supply to keep up.

Replenishing the volume or mass of water in the air is dependent upon evaporation rate, which in turn is dependent upon the air and water temperatures, the current humidity level and the surface area of the water source. Look at it this (very simplistic) way: individual water molecules are energetic and naturally move around and “vibrate”. As they do, they collide with other molecules, so their motion is blocked and they “hand off” some of their energy, while getting more from molecules that run into them. The density of the molecules in the air is lower than in the liquid, so at the surface, where there are fewer other molecules to run into, some of those water molecules will have enough energy to “break away” from the liquid and enter the air – as humidity. Unfortunately, that process is not exceptionally fast – place a cup of water on the counter and see how long it takes to totally evaporate. Also, as a water molecule “escapes” into the air, it takes its allotment of energy with it, reducing what’s in the water, thereby cooling it and reducing the future evaporation rate.

If we heat the water, we give those molecules more energy, so the escape (or evaporation) rate increases, hence the “warm air” humidifier. Our only other practical alternative to heating is increasing the surface area.

During the time this article was written, there was a cup of water on the desk. Its surface area was only about seven square inches, so we wouldn’t expect much evaporation. If we pour that water in a standard nursery tray, the surface area increases (where the molecules might jump out of the liquid) by almost 35 times to about 250 square inches. That seems like a great increase, but unfortunately is not a significant increase. A tray of standing water still takes a long time to evaporate. The common practice of adding pebbles to the tray so they are kept wet by capillary action may increase the surface area by two to three more times, but it’s still relatively meaningless. So, to get a substantial surface area, let’s atomize that cup of water.

Our cup of water is about 237 ml, or 237 cubic centimeters in volume. If we atomize that to 1 mm diameter spherical droplets (much larger than what atomizing humidifiers do in reality), we create over 4.5 billion droplets, having a surface area of almost 22 million square inches! Yeah…that ought to evaporate more quickly than a tray.

Hand misting may be better than putting water in a tray, but the volume has to be substantial, so it needs to be done frequently. Misting in the morning before going to work has only transient and a relatively meaningless benefit. A room humidifier can put several gallons of water into the air in a day, so you can see that a few pumps from a hand-held quart mister really won’t do much. It is also important that it be done into the air, not onto the plants, as all that does is wet the leaves. This makes a film with less surface area, and it improves the growing conditions for bacteria, molds, and fungi.