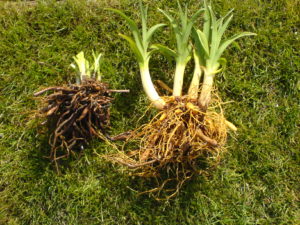 A few examples would be Hostas, Mums, Ornamental Grasses and many perennial flowers. Division is exactly as it sounds. You just dig up the parent plant that you intend to reproduce and quite simply divide it into many plants. Of course the size of the parent plant will determine how many times you can divide it.

Early spring is a good time to propagate by division, however, late fall will work as well. Propagation by division should be done when the parent plant is either dormant, or about to break dormancy in the spring. The dormancy season begins in the fall after the first good hard freeze, not necessarily a frost. A frost is usually not severe enough to trigger dormancy. It usually takes a good hard freeze when the temperature drops down below 32 degrees F. for a period of a few hours. It’s pretty easy to determine when a good hard freeze has taken place because any leaves remaining on the trees will be crinkled and severely damaged. Many will fall to the ground the next day.

Most people don’t realize that nurserymen can only dig deciduous plants while they are dormant. Once a deciduous plant develops leaves in the spring, it cannot safely be transplanted until late fall when it is dormant again. Digging a deciduous plant once it leafs out will immediately put the plant into shock and likely kill it.

Evergreens are a little different. They cannot be safely transplanted once new growth is established in the spring, but once that new growth hardens off later in the summer, evergreens can be transplanted. Of course, transplanting during dormancy is usually the safest bet.

Back to propagating by division – to divide a plant all you do is dig up the parent plant. The entire plant will come out of the ground in one large clump. Place this clump on a hard surface and just cut it into several pieces using a large knife or even a spade. Each division should have at least two or three sprouts or eyes. This is much easier to determine in early spring once the eyes have begun to develop, but the leaves have not yet developed. Once you have made these divisions, just replant each division back into your garden, keeping them watered, but not soaked.

Division is a very simple form of propagation, but it is only effective with a limited number of plants. Division will not work on what would be considered the higher forms of landscape plants. If a plant has a single stem emerging from the ground, then it must be propagated by another means.

Mike McGroarty is a Garden & Greenhouse contributing editor and the owner of McGroarty Enterprises and the author of several books. You can visit his website at Freeplants.com and read his blog at Mikesbackyardnursery.com.

Tips for Propagating Plants from Cuttings