The Importance of L-Amino Acids 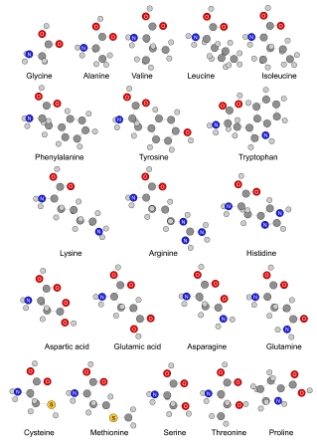 Amino acids are the building blocks of proteins, and they are integral to the chemistry of life. Without amino acids, there would be no enzymes and without enzymes, life as we know it wouldn’t exist. So amino acids are used by every living thing on earth, from the simplest microorganism to the most complex plants and animals.

Plants are “autotrophic” or in other words, they make their own food.  Plants take up nitrogen through the roots in the form of ammonium ions or nitrate ions. The plant cells then convert the nitrogen into amino acids, usually in the form of glutamic acid. The glutamic acid is then transported throughout the plant and rebuilt into all of the other amino acids. Then, through the miracle of the genetic code, the amino acids are built into specific enzymes to perform the perfect chemical reaction at the perfect time.

Some amino acids can also be transported directly into the plant through the plant roots. For example, the amino acid “tryptophan” is absorbed through the roots, transported upward to the leaves, then changed into a natural growth hormone called “auxin”. The auxin (IAA) is then pumped to the growing tips to stimulate the new growth of roots and shoots. On the other hand, plants also produce their own tryptophan. Some of the extra tryptophan is leaked from the roots to feed beneficial microorganisms that live on the surface of the roots. Amazingly, some to the microorganisms also change the tryptophan into IAA, and directly stimulate root growth.

L-amino acids are also intermediate chelators. The “acid” part of amino acid is carboxolic acid, and it ionizes in water to form a negatively-charged “claw” that can attach to positively-charged minerals that are dissolved in the water. The amino acids hold onto the minerals strongly enough to keep them from “locking out” with other minerals, but loosely enough to be released to the plants on demand. Therefore, amino acids improve the availability of important cations, such as calcium, magnesium, copper, iron, manganese and zinc. These trace elements are co-factors that actually activate some of the enzymes that are built from the amino acids. The activated enzymes are able to do thousands of chemical reactions per second without being used up in the reaction, and life goes on. Abundantly!

Is There a Universal Nutrient Solution Formulation?

Making Hydroponic Systems Efficient in Water and Reagent Use

The Importance of Micronutrients