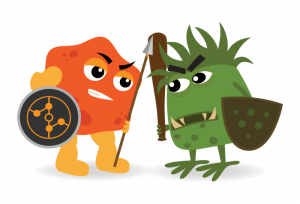 There is a symbiotic relationship between microbes and plant life in a natural soil environment. Plants like grass, trees and food crops depend on microorganisms in the soil to obtain water, ward off dangerous organisms, prevent nutrient loss and break down compounds that could inhibit growth. Soil microbes, in return, benefit from the health of plants growing in the soil. This relationship creates a dynamic living system that is easily broken by human systems that use pesticides, herbicides and fertilizers. The chemicals humans use to enhance plant growth can actually destroy the soil system, killing or causing mutation pressure on the soil microbes that all other organisms in the ecosystem need to survive.

What Soil Microbes Do for the Ecosystem

A small handful of healthy soil will include billions of microscopic organisms including fungi, nematodes, protozoa, micro-arthropods and other beneficial bacteria. These microbes decompose organic material while they absorb water and nutrients that would otherwise get lost in the soil; the absorbed water and nutrients is then used by more and more complex creatures. This ecosystem ranges from the tiniest bacteria to the largest mammal predators. Any damage suffered by one part of the system can affect the health of all the others.

Three Levels of the Soil Ecosystem

The first level of the soil ecosystem consists of bacteria and fungi that consume leftover organic matter, nitrogen and nutrients. These organisms act like a nutrient bank that plants can use when they need it. The second level of organisms consists of predators that feed on the bacteria and fungi. Nitrogen and nutrients are metabolized and released into the soil at a slow rate that is beneficial to plant growth. Higher-level predators, like millipedes and earthworms, make up the third level. These animals keep the second-level organisms in check, helping the plants maintain a healthy growth rate. The third level is also made up of bigger predators that keep the smaller ones from over eating. This extensive bio-diversity is what makes all life in the soil ecosystem possible.

Pesticides include a large group of chemical agents that attempt to eliminate destructive biological forces in agriculture. These include herbicides for killing plants, insecticides for killing insects, fungicides for killing fungus and bactericides for killing bacteria. While these chemicals supposedly only target specific species, repeated use inevitably kills some microbial life, both good and bad microbes. Research has been able to identify some indirect effects of continued usage of pesticides such as glyphosate. Microbes that survive exposure can be genetically altered in a way that is no longer beneficial to the soil ecosystem and they also become resistant to the chemical intended to kill them. 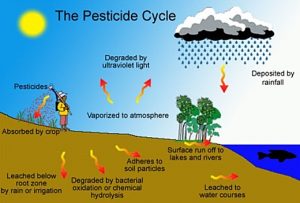 The destruction or alteration of first-level microbes can affect the entire soil ecosystem all the way up to the largest mammalian predators.  A study by Zobiole, et al, from 2011 concluded, “Glyphosate applied to GR soybean, regardless of cultivar, negatively impacts the complex interactions of microbial groups, biochemical activity and root growth that can have subsequent detrimental effects on plant growth and productivity.”1 While my company was conducting compatibility research of our mixture of microbes with various agricultural inputs at UC Davis we discovered that in-lab tests confirmed 100% lactobacillus species and yeast species in our EM-1 product were killed within 60 seconds of contact with RoundUp.2 There were similar results with other synthetic pesticides that demonstrated how potent these chemicals are to microbial life.

What Happens When Soil Microbes Go Out Of Balance

Microbial communities work in concert (or synergy) to out-compete antagonistic (bad) communities of microbes. There is a balance between “good” and “bad” microbes. Many microbial species (the good ones) kill or inhibit bad/pathogenic bacteria, fungi and nematodes (the bad ones) that attack the root systems of plants. Root health is important for the exchange of valuable nutrients in the soil. Good microorganisms improve the soil structure by producing glues (polysaccharides), hyphae strands and tunnels for air and water. Good microbes also eat a lot of toxic material that would otherwise make for poisonous soil. An imbalance of soil microbes can result in parasitic infestations, root disease, breakdown of the soil structure and build-up of toxic compounds. When soils are repeatedly treated with toxic chemicals, the balance between good and bad is disrupted and the soils can actually become toxic to plants.

Microbe numbers in the soil can be maintained by making sure the soil has plenty of digestible plant material (organic matter) with high levels of nitrogen to feed microbes. A blend of proteins from vegetable and animal sources can provide the material to help make this possible. Likewise, regularly watering in a healthy dose of an all-natural microbial inoculant will enhance the soil with beneficial microbes for crops. High-quality organic composts, grass clippings and lawn litter can also benefit soil microbes. And, of course, harsh pesticides should be avoided due to their destructive impact on microbial life forms.

The History of Sub-Irrigated Planters and Why You Need One