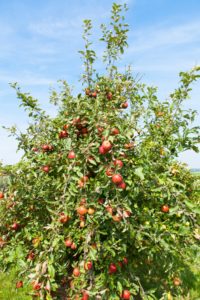 There are many diseases that can attack apple trees; however the most common and destructive apple tree diseases include Powdery Mildew, Apple Scab and Fireblight. Fireblight can destroy an apple tree, while mildew and scab can dramatically reduce the apple crop and even cause the tree to drop all its leaves.

The following apple tree facts will help you understand what is going on with your apple tree and how to prevent and or cure whatever problem you might have.

Powdery Mildew causes the foliage to become distorted, the fruit becomes stunted and discolored and the apple tree may have difficulty putting on new growth. If Powdery Mildew is left untreated, the tree will weaken and become more susceptible to other pests and diseases. Symptoms first appear in the spring as small, white patches of fungal growth on the leaves. By midsummer, tiny black round specks appear on the underside of the leaves and the fungus rapidly spreads to twigs and buds. Infected blossoms shrivel and drop without producing fruit.

Apple Tree Scab is caused by the fungus Venturia inaequalis. Symptoms of Apple Scab appear in the spring as small dark, olive green spots on the leaves. A severe infection may cause the entire leaf to turn brown and drop from the tree. The fruit becomes marred by slightly raised black spots. Planting scab-resistant varieties is the easiest way to avoid Apple Scab. Groundfalls and leaf litter should be removed from beneath the trees to deprive the disease of a place to spend the winter.

Apple Tree Scab can be controlled organically with a dormant oil spray applied in later winter. Dormant oils are highly refined oils that will smother the Apple Scab fungus. Dormant oils are also effective for smothering the eggs of insects such as aphids and mites. As the name implies, dormant oils should be used while the apple tree is dormant. There are also summer oils that can be applied during the summer to kill insects on apple trees. A good garden center or a catalog that specializes in fruit trees will offer dormant and summer oils for apple tree care.

Fireblight is a bacterial disease that affects apple trees and their relatives. Crabapple trees, quince, mountain ash, spirea, cotoneaster, pyracantha and hawthorn can also be infected with fireblight.

Fireblight can develop in early spring, encouraged by rainy weather and temperatures above 60 degrees Fahrenheit. Blossoms and twigs will show the early symptoms of wilting, shriveling and turning brown or black. 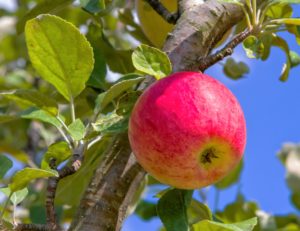 The tips of young twigs will wilt and curl, while dead leaves will often remain attached to the branch. Infected twigs will appear to be water soaked and will later turn dark brown or black. As the fireblight bacteria spreads into the main branches, the bark may crack along the edges of the infected area and produce a canker. If left untreated, the cankers become blackened, giving the appearance of scorched wood. Fireblight bacteria overwinters in living tissue on the margins of the cankers and is then spread to other trees by insects or splashing rain.

To control fireblight, all infected twigs and cankers should be removed from the tree during winter, before the plant puts out new growth in the spring. Pruning cuts should be made at least twelve inches below any sign of infection, and the pruning tools should be disinfected between each cut. A solution of one part bleach to nine parts water will disinfect your tools and help avoid spreading the fireblight bacteria.

There are a variety of insect pests that attack and damage apples. Apple maggots, codling moths and plum curculio are some of the most common pests that will reduce or destroy an apple crop. All three of these insects can be controlled by keeping fallen apples from accumulating around the trees or with insecticide sprays.

Adult apple tree maggot flies lay their eggs beneath the skin of growing apples, and upon hatching the larvae tunnel throughout the fruit, leaving brown trails behind that make the fruit unpalatable. The burrowing often results in the infected fruit falling from the tree. Once the apples are on the ground, the larvae leave the apples and travel into the soil where they continue their life cycle. If fallen apples are gathered and carefully discarded two or three times weekly, the apple maggots will not have the opportunity to burrow into the soil and grow into an adult fly. If insecticides are used to control apple maggot, the spray should be applied in two-week intervals beginning in late June through mid-August. Be sure to follow the application directions for any insecticides used and avoid spraying the tree close to harvest time.

Plum curculio is a fancy name for a weevil that attacks apple trees and other fruits. The adults feed on the apple buds, blossoms, leaves and young apples, but the worst damage they do is from their egg-laying activities. The adult weevil chews a small hole in the fruit for the eggs which causes the fruit to become scarred and distorted. The fruit becomes further distorted as the larvae feed inside the apple. The damage may cause the apple to drop to the ground where the larvae then migrate into the soil, much like the apple maggots mentioned earlier.

A grower with just a few apple trees can shake the sleepy weevils from the trees in the early morning and onto sheets spread below the trees. The fallen weevils, along with any fallen fruit, can then be dropped into a bag and discarded. If chemical insecticides are used to control plum curculio, they should be sprayed three times at 7-10 day intervals beginning when the blossom petals fall in the spring.

Codling moths are one of the most serious insect pests of apples. The larvae of codling moths are what is commonly referred to as apple worms. Codling moth larvae tunnel through the fruit to the core, pushing out a mass of chewed material behind them. This damage reduces the storage quality of the fruit and makes the fruit inedible.

Codling moths begin to appear as the petals are falling from apple blossoms in the spring. Within about three days the female moths begin to lay eggs on the leaves and developing fruit and the larvae emerge 8-14 days later, immediately entering the fruit to begin feeding. A second brood may appear in September, except in very cold climates.

As with the other insect pests mentioned here, the codling moth population can be reduced by picking up the fruit that has fallen from the tree. Codling moth larvae tend to make their cocoons and hibernate under loose bark on the tree, but they can be tricked into hibernating in traps. To trap codling moth larvae, tightly attach strips of corrugated cardboard two to three inches wide to the tree’s trunk and larger branches in June and August. After the larvae crawl into the cardboard and make their cocoons, the strips can be removed and destroyed. If you plan on using chemical insecticides for a codling moth infestation, the insecticide should be applied every 10-14 days from the time the petals fall nearly to harvest time.

Your County Agriculture Extension Agent is an excellent source of information on which insect pests are most prevalent in your area and which insecticides are most effective on those pests. There are both chemical and organic sprays available, and no matter which you opt to use, diligent spraying and orchard hygiene are necessary for a blemish-free apple crop.

Mike McGroarty is a Garden & Greenhouse contributing editor, the owner of McGroarty Enterprises and the author of several books. You can visit his website at Freeplants.com and read his blog at Mikesbackyardnursery.com.

Maintaining Trees in the Landscape

The Magic of Pear Trees