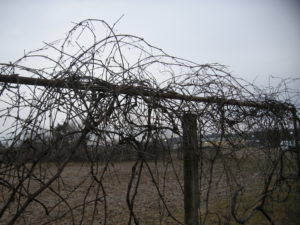 My friend Jes bought a home in a rural area with a large plot of land. She does not have a green thumb and I was instantly jealous when I discovered her house came with lilac trees, hydrangeas, beautiful blue irises, hibiscus and the topper on the cake was an old grape vine. I have always wanted a grape vine, and here my friend was bestowed with this amazing piece of horticulture. It was truly a beast at over 10’-0” in length and in my mind it was ancient. The vine’s diameter was the size of a tree limb helping to prove it had age. This grape vine grew on a two tiered metal trellis that was close to 6’-0” in height.

The first year Jes lived in the house the grape vine gave her a few bunches of grapes but the second year it gave nothing. This prompted a complaint from Jes so I came over to look at the vine. Let me preface with the fact that I knew nothing about growing fruit. I recollected hearing that grape vines needed to be pruned, but that was all I knew. It was an instant project for me, and I decided I would try to bring this vine back to fruiting.

Knowing nothing about raising the vine I turned to the internet where I read several articles on how to grow grapes. Sure enough I learned the vine needed to be pruned yearly. I assumed Jes’ grape vine had not been pruned for years. Instead of doing adequate research I forgot until the day I had to go to Jes’ house and at the last minute I watched a 5 minute tutorial and decided I could handle the pruning.

The video said the vine needed to be pruned in the dead of winter which is either January or February where we live in Pennsylvania. I came armed with a pruner and was instantly overwhelmed. The video made it look so easy! Prune out the old canes and leave a few new ones. Simple, right? Maybe for a vine that had been pruned each year, but not this mess. There were canes everywhere and some of the canes were so thick they looked like branches of an oak tree. The lady in the video was in a vineyard where her vines were in straight orderly rows with the canes attached to the trellis. Jes’ vine looked like a hurricane and a bad hair day. There were canes crossing canes, canes on the ground, canes sticking into the air.

I had no clue which canes were new and which were old because they looked the same. The video said that mahogany colored canes were the new branches and they needed to be saved. To make matters worse I left work at 4:30, got to Jes’ place at 4:40 and had 20 minutes of daylight before it was dark. I decided to do a quick inspection and then started whacking at the vine. My mom and I have been described as rippers and throwers with our gardens and this was no exception. Anything questionable was removed from the vine and thrown onto the ground. I started hacking away at one corner of the vine and slowly moved down the trellis, removing anything that looked old, gnarly and thick. Canes that looked close to mahogany brown and were roughly the thickness of a pencil were saved. Any questionable cane was snapped in half to see if it had a green center, which told me it was a new branch. I also had to select straight canes that did not overlap other canes. It took me four consecutive nights to prune the vine and after finishing I was immediately scared I had chopped off too much. The grape vine lost at least 85% of the branches when I finished.

That was in January so we waited two months for March to arrive. March came and I stopped by each week to see if anything was growing.  Finally I saw buds and knew the vine had survived.  I was ecstatic and told everyone I knew, only to have them roll their eyes at me. 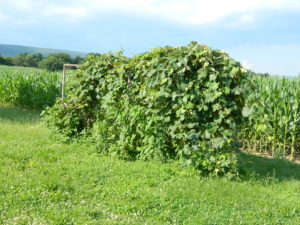 By early summer the vine was filled with leaves and it looked healthy, but it wasn’t blooming. I assumed like all fruit it had to bloom to produce fruit. In my mind I was waiting for flowers like you see on an apple or peach tree. I assumed the vine would be covered with beautiful blooms. Of course I was wrong and then turned to the internet where I learned that grapes produce very small blooms. A grape’s bloom is nothing like a peach tree’s flower. Instead of a large white bloom, a grape’s flower is so small it is almost missed. After blooming the fruits develop and then set on the vine. By midsummer our vine was filled with countless grapes and was an amazing site to see. The berries continued to grow, and by fall the first grapes were ripening. We discovered it was a typical Concord grape vine.

There were so many grapes and we didn’t know what to do with all of them. Stock pots were filled and refrigerated and in the end we gave up and fed the grapes to chickens. While we may have failed at using the grapes it was pure excitement to watch the vine grow, produce leaves, bud and ripen fruit. Next year I intend to cut off half the grape bunches to reduce the sheer volume produced. Maybe we will become domestic and make jelly or wine, but I wouldn’t hold my breath quite yet.

G is For Grape