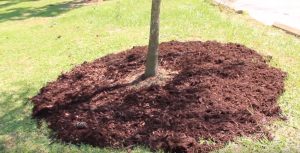 Mulching is one of the best things you can do for your plants if done right, but too much or improperly installed mulch can be a real problem.

The Problem with Mulch Volcanoes

The common practice of mounding mulch against the trunk has proven to be a fatal one for many trees. These often seen “mulch volcanoes” are perfect circles 8 to 10 inches thick piled against the trunk and are actually creating more problems than they are solving. What makes the problem worse is that many of these trees are on commercial properties under professional care, and this has helped create the false impression that this is the proper way to mulch trees.

Homeowners see this and imitate the practice on their own trees. The neat, clean appearance it gives a landscape is appealing to many. In fact, I have had several customers over the years ask me if there is a mold they can buy to make these volcanoes on their own trees! So in our quest for a beautiful landscape we are unknowingly sacrificing the health of the trees in the long run.

The bark on the roots of a tree is much different from the bark on its trunk or branches; it is able to tolerate moisture as well as the lower oxygen levels in the soil. The above-ground portion of the tree, which starts at the root flares, has bark that contains tiny openings which are used to release gases and toxins from its system. On plants such as cherry trees or forsythia, these sites are easily seen as tiny white dots or dashes on the bark and are called lenticels. Because of this important function, a tree can’t tolerate soil or mulch placed above its root flares. The lack of air and the presence of excess moisture prevents natural respiration from the bark and causes a buildup of gases and toxins in the bark tissue.

If soil or mulch disrupts the respiration of the bark, the tree will usually respond in one of two ways. On thin-barked, young trees or species with naturally thin bark, like beech or linden, this disruption causes cankers (wounds) on the trunk. These appear as areas of dead tissue and provide an opportunity for decay to enter the tree. Other species will react by sending out additional roots from the trunk. These roots often end up circling around the trunk and become girdling roots in the future. Researchers are now finding out that trees with girdling roots and excess soil and mulch build-up are much more prone to snapping off at the base in wind and ice storms. The longer the problem exists, the more damage occurs, and the chances of correcting it go down.

Note that all trees will not respond in the same way – species, age, and health all need to be considered when trying to evaluate the effects of past damage. Most willow trees, for example, are very adaptable to a change of grade and often will show no problems at all.

If caught soon enough, it can be corrected and tree will recover. However, upon root crown inspection, if it is found that large cankers have formed and decay is present, or if the tree has developed extensive girdling roots, it might be wiser to remove and replace the tree than to attempt to save it. During the root crown inspection, arborists use a high pressure air device called an “air spade” to safely remove the excess soil and mulch without damaging the root system. Once the soil is removed, there is a clear view of the buried trunk and roots, the damage can be evaluated, and a decision made as to which roots to leave and which can be safely removed. It is very important not to remove too much too soon or the tree will be shocked. Sometimes the work will have to be done in stages over a couple of years.

While it is common to see 4 to 6 inches of mulch around a tree, this is usually too much. I would suggest 2 to 3 inches placed in a ring around the tree with the center around the trunk empty, kind of like a doughnut. How wide to make the ring is up to you, but the farther the better. Trees don’t like to compete with lawns for nutrients and water, and the more mulched area you can give them, the better off they will be. Mulched trees have fewer problems than trees growing in lawns. Even a small, 2 to 3 foot ring can make a big difference. The mulch creates a more natural growing environment with its organic material breaking down and supporting vital soil microbes. Other benefits include increased moisture retention and cooler soil temperatures, both of which favor optimal root growth.

If done properly, mulch is a great asset to your landscape and aids your trees during summer drought periods by maintaining soil moisture. It also helps insulate the roots during the winter months, which allows them to remain active longer into the season.

Steve Turner, Certified Arborist, is from Arboricultural Services in Fenton, MI. He can be contacted at wecarefortrees@gmail.com.

How Black Walnut Trees Can Affect Your Plants

How to Grow Beautiful, Flowering Dogwood Trees from Seed

The Magic of Pear Trees